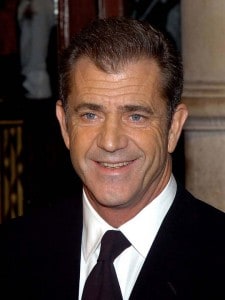 Mel Colm-Cille Gerard Gibson (born January 3, 1956) is an American-Australian actor, film director, producer and screenwriter. He was born in Peekskill, New York, moved with his parents to Sydney, Australia, when he was 12 years old, and later studied acting at the Australian National Institute of Dramatic Art.

After appearing as an action hero during the 1980s, Gibson went on to found Icon Entertainment, a Production Company which independent film director Atom Egoyan has called, “an alternative to the studio system.”

In 1995, Gibson produced, directed, and starred in the Academy Award-winning Braveheart. In 2004, he directed and produced The Passion of the Christ, a controversial film depicting the last hours in the life of Jesus Christ.

Michael Doherty (RTE Guide): Better director than actor; made the most of his talent to carve out a successful career before becoming Hollywood s forgotten man.

Alvean Jones (tv presenter): Lost the run of himself banging on about religion, as an actor he seems ok, as a director I like his attention to detail.