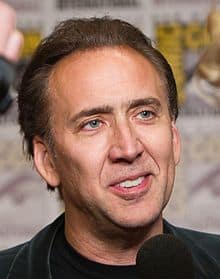 Nicolas Kim Coppola (born January 7, 1964), known professionally as Nicolas Cage, is an American actor, producer and director. He has performed in leading roles in a variety of films, ranging from romantic comedies and dramas to science fiction and action movies. Cage is known for his prolificacy, appearing in at least one film per year, nearly every year since 1980 (with the exception of 1985 and 1991).

Cage received an Academy Award, a Golden Globe, and Screen Actors Guild Award for his performance as an alcoholic Hollywood writer in Leaving Las Vegas (1995) before coming to the attention of wider audiences with mainstream films such as The Rock (1996), Face/Off (1997), Con Air (1997), City of Angels (1998) and National Treasure (2004). He earned his second Academy Award nomination for his performance as Charlie and Donald Kaufman in Adaptation (2002). In 2002, he directed the film Sonny for which he was nominated for Grand Special Prize at Deauville Film Festival. Cage owns a production company Saturn Films and produced films such as Shadow of the Vampire (2000) and The Life of David Gale (2003).

Though his performances in The Weather Man (2005), Lord of War (2005), The Bad Lieutenant: Port of Call New Orleans (2009), and Kick-Ass (2010) earned critical acclaim, and films such as Ghost Rider (2007) and Knowing (2009) were box office successes, Cage has been strongly criticized in recent years for his choice of roles, some of which have been universally panned.[2][3] Most recently, he starred in The Croods, The Frozen Ground and Joe which all received acclaim.

Ferdia McAnna (writer): Nicholas Cage was terrific in Red Rock West and Con Air and Face Off. He gets a lot of bad press but I like him. He also rocked Wild At Heart.

Michael Purcell (actor): I don’t like Nicolas Cage but that’s more to do with his personality than his acting.

Stuart Dunne (actor): De Niro, Di Caprio, Cage, Crowe, Washington, they would give me some thing to think of, and their interpretation of their roles

Paul Tylak (actor): I don’t like him, he’s not versatile.

Michael Doherty (RTE Guide): A quirky screen presence who can deliver the goods at times, but too often is over hammy in lame movies.

Alvean Jones (tv presenter): Don’t know why so many people hate him, but I don’t care about him.

Film fan: Nicholas Cage – Hunk but not into his films.