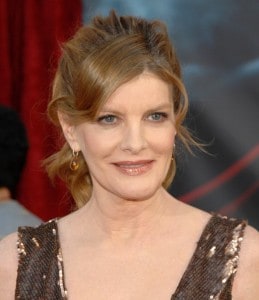 Rene Marie Russo (born February 17, 1954) is an American actress and former model. She is known for starring in a series of popular, big budget thrillers and action movies throughout the 1990s.

In 1989 she made her motion picture debut with the part of the lead characters girlfriend in the film Major League (1989). Her subsequent roles were that of girlfriends and supportive wives in a few films until her breakthrough as an internal affairs detective in Lethal Weapon 3 (1992). Rene Russo has been praised for her ability to hold her own against her major male co-stars, which have included Mel Gibson, Clint Eastwood, Kevin Costner and Pierce Brosnan.

Two of her performances within the last few years have gotten her recognition as both a major dramatic actress and a talented character actress. One was as the mother of a kidnapped son in Ransom (1996). The other was as the cartoon femme fatale foreign spy in The Adventures of Rocky & Bullwinkle (2000). Although the latter received mixed reviews among moviegoers and critics, Russo was praised for her performance of a role originally slated for Meryl Streep in 1992. Rene Russo has been married to screenwriter Dan Gilroy since 1992, and they have one daughter, named Rose. They reside in Brentwood, California.

She has been nominated for several awards, including two nominations for the Saturn Award for Best Supporting Actress.

Melissa Camire: I think Russo tends to overact but did enjoy her in The Thomas Crown Affair.

Alvean Jones (tv presenter): Good actress. Really liked her in Lethal Weapon 3/4, but haven’t seen her in a while